Have Primo, Will Travel 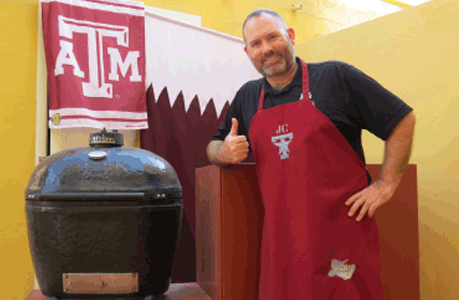 My wife surprised me with my Primo for an anniversary present in 2011.

One of my buddies had one and my wife decided instead of us going over to their house with me cooking on their primo she wanted me to cook at our home. I use my Primo to cook anything from steaks at 500°F, veggies or smoked turkeys at 225°F. Pizza is on the list but I have not made it that far.

I love my Primo so much that I took it half way around the world. In December of 2012, I used 300 lbs of our 900 lb shipping allowance to ship it to Doha, Qatar (Middle East) when we were transferred. It might be the only Primo in the Gulf Region. I have been telling the locals and expats about it when they ask about how do you get your meat so moist and tasty. I tell them it has a lot to do with my Primo and the different ways you can cook with the ceramic grill.

Several have asked to buy it from me. I tell them they will just have to keep coming to me until I leave. Being from Texas it has helped both my wife and I have some taste of home and helps a little with homesickness. One of my bosses told me that my brisket could rival C&J's BBQ in College Station (his favorite) and that I should try to open a BBQ place here in Doha.

My last gill was gas which was OK, but no comparison to the Primo's temperature regulation, smoking and grilling capabilities along with keeping the meat moist.

My Primo has helped us keep a taste of home and build new friendships through BBQing so far away from Texas.